Lakeview Homes Made a Strong Comeback in New Orleans, LA

Lakeview is one of many neighborhoods in the city of New Orleans.  The boundaries defined by the City Planning Commission are: Robert E. Lee Boulevard to the north, Orleans Avenue to the east, Florida Boulevard, Canal Boulevard and I-610 to the south and Pontchartrain Boulevard to the west. Based on a 2010 census there were 6,394 people living in the area.

Lakeview had it’s beginning as  mostly middle class, but it became more economically upscale in the last couple decades. As of late, many larger newly constructed homes have replaced older, modest homes in much of Lakeview.

In August of 2005, Hurricane Katrina hit southeast Louisiana.  The waters of Lake Ponchatrain rose, and levees failed. The 17th St. Canal Levee was one of the most important levees to protect New Orleans.  With it’s collapse, it put the majority of New Orleans under water.

The flood waters inundated Lakeview in a matter of minutes.  Near the levee breach, the force of the water took homes off their foundations, uprooted trees and turned Lakeview into a disaster zone, that for a long time did not show signs of coming back.  Many homes had as much as 14 feet of water, and were a total loss.

Most residents of Lakeview had a way to escape the city before the storm hit, so not as many lives were lost there as in other areas of the city.  Many life long New Orleans residents moved to the Northshore of the city.  Most of the Lakeview victims were elderly, that just did not heed the warning to evacuate.  Many of them had been in those homes their entire lives.

Only a few homes had been restored by early 2006.  Some two-story homes were being occupied on the second floor, and FEMA trailers were r 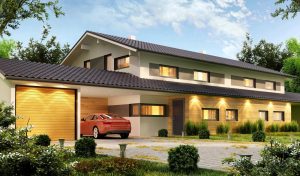 olling in.  A different picture by Spring of 2007.  Lakeview began to rebuild, bigger and stronger.  Stores and restaurants were coming back.  Some homes could not be salvaged, but the land that they sat on was valuable, so more expensive homes started popping up.

The residents of Lakeview have worked hard to rebuild their neighborhood, and even better than before the storm. Now, almost 12 years Post Hurricane Katrina the average home price today in Lakeview has risen to between 450k-550k.  Home Sales are at a steady pace in Lakeview today.